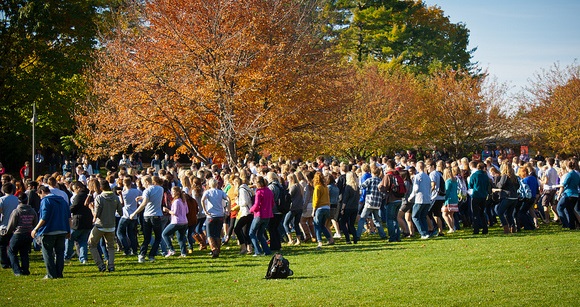 Oh, flash mobs. How we love thee. Any excuse to get rambunctious and cause wide spread mayhem is usually enjoyed by all.

If you’ve been living under a rock and don’t know what a flash mob is, here you go: a flash mob is a group of people who seemingly appear out of thin air to perform an unusually and basically pointless act for a brief time and then disperse. Thanks, Wikipedia, for that.

But using a bunch of fancy words to describe the phenomenon is not nearly as impressive as observing it.

In order to observe some of the best flash mobs out there, we turn to the world’s best and brightest – college students. Our college years are packed full of valuable learning experiences – walks of shame, all night study sessions, keg stands, tailgating…and flash mobs. At what other point in time are random acts of disruption better received?

You might be asking yourself, Why would people waste their time learning choreographed moves and then embarrass themselves by performing them in public? Well, we can think of a few great reasons…

Because More People Will Pay Attention if Dancing is Involved

Gone are the days when student groups pass out flyers on the quad. Now, to raise awareness for an issue, students must go big or go home. What is a sure-fire way to get everyone talking about your cause? Clearly, instigating a flash mob is the correct answer.

Check out the flash mob the Osmania Medical College students hosted at a local mall. They were hoping to raise awareness for World Health Day. Clearly, they did a good job!

Flash mobs come in all shapes and sizes – and music, choreographed dance moves and impressive costumes aren’t necessarily a prerequisite. Check out how the library science majors at Lafayette drew attention to Banned Books Week.

Students at Oregon State University busted out some wicked dance moves to promote diversity awareness. If Bollywood dancing isn’t the ultimate diversity bonding experience, I don’t know what is.

Have you ever heard of Meat Free Mondays? Chances are, the majority of students at Warwick didn’t know either. That is, until a campus organization decided to flash mob the subject at the peaceful library.

The members of the African Youth League at Ohio State University took to the dance floor to promote African Night. From the looks of their flash mob, the event will be quite entertaining!

Because Some Fads are Destined to be Memorialized

It is common knowledge that college is the time for crazy antics. Doing things you would never normally do is basically the definition of higher education. It would be a shame to let those years pass by without embracing the current trends.

The Harlem Shake was one of those trends that just couldn’t be left alone. It was memorialized at Greenville Technical College…

And when students weren’t doing the shake, they were going Gangnam Style. Check out how the Graduate School of Business gets down at Stanford University.

Some students just aren’t cut out for the pomp and circumstance that surrounds certain formal events. While many special occasions are fairly memorable on their own, nothing makes the day more special than an accompanying flash mob.

For example, donning a cap and gown for a few hours to attend a stuffy, dignified ceremony might not be super exciting for everyone in attendance. But, if those University of Michigan graduates put a little spring in their step…well…that would be different!

Starting a new school year is difficult for some students. Between boring lectures and torturous exams, there isn’t a lot to get excited about. Fortunately, the students at Berry College found a way to liven up the start of a new school year.

December brings about two special events – Christmas and the end of a semester. Why not celebrate those occasions? Some students at Dean College wanted to give their fellow students a festive farewell.

Why get down on one knee to pop the big question? Why not entice a few of your closest friends to help you shock and amaze your girlfriend? Fortunately, Tyler was able to find just a couple of people at Peterborough Regional College to help him flash mob is future fiancé.

Exam week sucks. Period. However, watching Darth Vader conduct a choir while singing Carol of the Bells could lighten the mood. Check out the musical talents found at Algonquin College.

Because the Home Team Needs a Pick-me-Up

Flash mobs can induce a lot of different emotions, but toss one into a sporting event and it’s like an instant jolt of enthusiasm for the home team. Nothing gets the fans and players more jacked up than a flash mob.

First, let’s take a look at what the students at Washington State University came up with. The cheer squad was polite enough to lead everyone in a pretty effective – yet slightly tame – production.

This second attempt is a little more noteworthy. While smaller, the flash mob at the University of Kansas definitely gets the job done!

Now, the crème de la crème. Maximum mayhem is what flash mobbing is all about. And it appears the students in Maryland have it down to an art form. Has anyone ever seen such an enthusiastic student section?! I mean, everyone gets in on the action in this one!

Just Because You Can

As we’ve discussed, flash mobs can be useful tools. However, that doesn’t mean there needs to be a purpose behind each and every flash mob that takes place on a college campus. Sometimes, students bust a move just because they can.

Watch how the performing arts students at Emerson College proudly displayed what they learned during the year.

Apparently the students at University of Delaware just had a burning desire to relive their childhood. I mean, it doesn’t get much better than Hanson and Spice Girls, right?

Perhaps the best example of “just because we can” came from Ohio State University. It appears this true flash mob – everyone was totally surprised – was staged just for the students’ enjoyment. The Glee cast members would even be proud.

Well, what did you think of these college flash mobs? Do you know of a killer performance we left off the list? Let us know in the comment section below!

Infographic: You Are What You Read